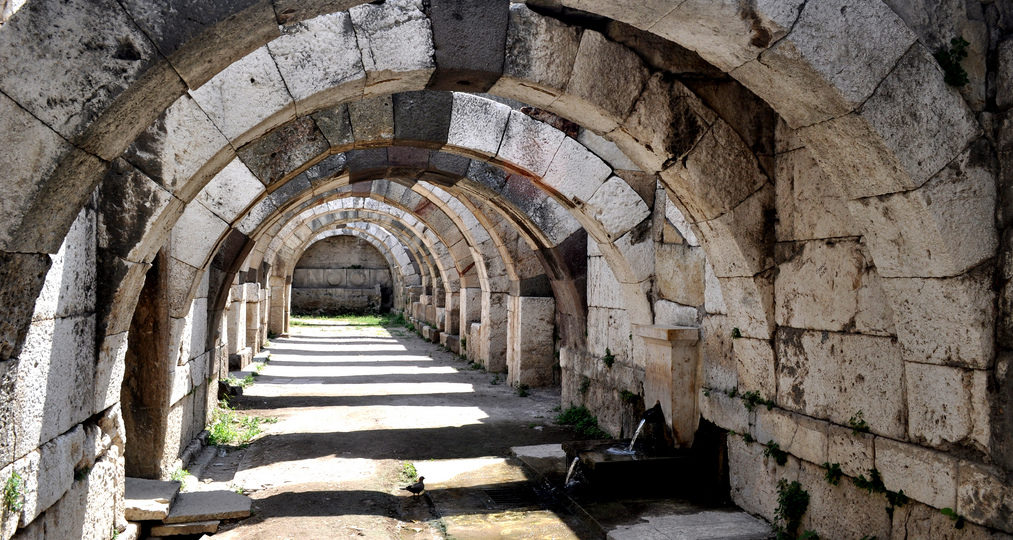 It had not gone according to plan and now they were hundreds of kilometres from where they expected to be. Then the man from Macedonia called out in a vision “Come over and help us.” This was not the first change to Paul’s plans on this trip.

Some time before in Antioch, Paul and Barnabas had discussed their plans. “Let’s go back and visit the brothers in all the towns where we preached the word of the Lord and see how they are doing” Paul proposed.

In the end it was Silas who set off with Paul on his second missionary journey, which began by retracing the first one in reverse. Eventually they reached the region of Pisidian Antioch where they crossed the border into Asia, intending to preach the Gospel there. The journey through Asia took them some 600km on foot to Troas but the Holy Spirit prevented them from preaching there at all. When they reached the northern border of Asia they attempted to enter Bythinia but the Holy Spirit prevented them from leaving Asia.

In the first article in the “Mans Plans and God’s Purposes” series we learned about implementing God’s plan from the failures of Joshua. In this article we look at experiences of both Paul and Peter to learn a little more about the ways God uses to reveal his plans and some of the challenges that we face in working out how we align what we do with God’s plans and purposes.

The situation must have been frustrating for Paul. That Paul was not allowed to preach the gospel in Asia was clearly an issue because we are told about it. This also clearly implies that Paul had intended to preach in Asia. His passion was to preach the Good News and establish new churches whenever and wherever he could, and yet he was constrained from preaching in Asia but not allowed to leave. That journey across Asia would have taken at least 40 days but Paul was constrained not to declare the “good news of the gospel of the glory of Christ“.

What was happening to Paul’s plans? Surely he should preach the good news when he could?

Things were not going as Paul had expected but they were going how God had planned. God was directing Paul to Macedonia, which was where he wanted Paul to minister and to see rich results. Preventing Paul from preaching in Asia meant that he and his party arrived in Macedonia relatively quickly.

Who’s Plan Is It Anyway?

Paul’s encounter with God’s plan regarding his ministry, recorded in Acts 15 and 16, highlights the tensions between man’s plans and God’s purposes. Given what we know of Paul’s character it seems impossible that he would not have prayed over his plans and listened to God before formulating the details.

God Reveals His Plans A Step At A Time

The least likely reason for Paul’s plans being constrained is that he had gone his own way until God had disrupted and overridden them. The most likely; God had only showed Paul part of his plan to start with and the rest in due course, in his own time. That meant that Paul probably did not have the full picture of God’s plan when he embarked on his journey.

It seems that Paul had in mind evangelising Asia. It was a highly credible and sensible plan, however, God wanted him to go to Macedonia and that is where he ended up. Had he preached in Asia he may have spent months in each place establishing new churches, as was his practice, and so conceivably taken a year or two to get to Troas and Macedonia.

It is more likely that it was God’s will that Paul arrived in Macedonia in a timely manner than to deprive Asia of the Gospel.

What can we learn here? Because God sometimes only reveal his plans a step at a time we must always be ready for his “mid course correction” and not be so wedded to what we are doing that we are reluctant to change course as he directs. Sometimes, we may need to embark on the journey knowing that we do not have the full plan yet.  That of course brings Abraham to mind of whom we read in Hebrews 11  “and he went out, not knowing where he was going“. That can be a test of faith that is unnerving in the extreme.

Understanding God’s Will Can Be Difficult

There is another potential explanation as to why Paul’s plans were changed.

When it comes to responding to God’s will, whether it be set out in the Bible or as some specific response from him to prayer, there are three points at which we can get it wrong. We have to hear God clearly, interpret what he says correctly and then apply that by taking appropriate action. It is easy to “get it wrong” at each step.

The lesson from this is that we need to be careful when seeking God’s direction. We need to check out what we heard and how we respond before we leap in with both feet. That said, it is hard to believe that Paul was not careful to be as confident about his plans before God as he could be.

It is God’s plan that prevails

Whatever the reason for the constraint upon Paul and the change of plan, the point is that given God’s sovereign and omnipotent nature, it is his plans that come to fruition, not those of man.

God Reveals His Plans in His Time

The other thing that emerges from Paul’s story is that aspects of God’s plan are not necessarily made plain until he is ready to do so. When Paul planned his journey the sovereign, omnipotent God could have directed him to add Macedonia to his itinerary, or even to go there directly after Pisidian Antioch, but he didn’t. He waited until he was ready. Why? I guess that this side of heaven we will never know.

The Importance of God’s Plan

The importance of our compliance with God’s will is made plain by John in his first letter “This is the confidence we have in approaching God: that if we ask anything according to his will, he hears us. And if we know that he hears us – whatever we ask – we know that we have what we asked of him.”
1 Jn 5: 14 & 15. In short, our prayers need to be aligned to God’s will in order that we have the confidence that “[we will] have what we asked of him“. By extension, this applies to the things we plan to do for the Kingdom, for him.

There are two major aspects to God’s will: That which is revealed in the Bible and that which he may reveal directly in some way, Paul’s vision of the man in Macedonia being an example of the latter.

When it comes to planning our contribution to the Kingdom of God it is plain that we need to have a sound, but not necessarily expert Bible knowledge. Operating in line with what God has revealed in the Bible is a prerequisite.

In seeking to determine God’s plans for specific situations we must rely upon God and thus stay away from philosophies and methods – the wisdom of the world – which are contrary to or divert from Biblical principles. For instance consultation of mediums is a no-no (Leviticus 19:31)  as is reliance upon human wisdom (1 Corinthians 1:20-25) and this by extension should make us careful about methods based on human wisdom. There is more about that in the third article in this series.

When God’s Plan Is Beyond Our Conception”

Peter had just been invited to eat what he considered to be unclean food, more than that it was God that had made the invitation three times by means of a vision (Acts 10). Peter who was a leader of the church, Peter who had walked with Jesus was being asked to do the unthinkable. He had gone through so much before and after the Crucifixion: he had been taught by Jesus and learned from him, he had been filled with the Holy Spirit and delivered the Pentecost sermon, he healed the crippled beggar, he stood his ground before the Sanhedrin, he saw Ananinas and Saphira drop down dead and more. Despite all this, he was simply unable to conceive of what God was asking him to do; it was so alien to his way of thinking. God wanted him to minister to gentiles, this was unthinkable, and yet it was God’s intent.

Sometimes God’s plan is so contrary to the way that we think that, unless he directs us more plainly, we are unable to participate. Then our wisdom, and by implication the methods that arise from such wisdom, is of no use, in fact it stands in the way of God’s plan because these methods, that originate from man’s wisdom,  inherently encompass this lack of conception regarding God’s will.

Of course, our sovereign God can do anything that he chooses to do, nevertheless we should not test him by using the world’s wisdom as  matter of course and hope that he will overrule the outcome. Sometimes, we may find ourselves in a place where in faith we feel that we have no choice to do so. That should not be the norm but even then we would proceed prayerfully.

Take a moment to reflect upon how you establish your plans.

Is it difficult to be flexible to God’s course corrections? What is your experience?

This is part of a three article series entitled “Man’s Plans and God’s Purposes” which looks at the issue of how we determine God’s plans and then execute them.