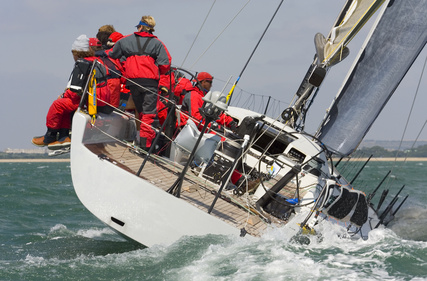 Christian leaders in all spheres lead teams and Jesus’ servant leadership model is key to being a team builder and developing a team that achieves its full potential. Check out how your team is doing.

I remember studying English Literature at school, not my greatest achievement I have to say. However, I remember a phrase from one poem that we studied. I cannot remember the title or the poet, just the phrase.  As far as I remember it went something like this: the hero of the poem – whoever he was – “leapt onto his horse and rode off in all directions at once”*. Does that sound like your team – riding off in all directions at once?  It’s not uncommon and its one of the reasons that as a leader there is hope. You can do more with what you’ve got, the secret is to get the team to all ride off in the same direction! Its like the guys in the picture of the yacht. If they were not all in the same place, working together, the boat would capsize and the race lost. Many teams, even Christian teams, do not deliver the goods because they have never gelled into a team and they remain a group of individuals, and to the frustration of their leader they each riding off in a different direction.

The Christian Leader’s Approach is Crucial

It has been said that a team is not a team until it has been made into one, before then it remains a group. At best a group delivers the same result as if its members worked individually. At worst they work against each other reducing effectiveness. This can sometimes create a toxic atmosphere which spills over and demotivates everyone else. But when they are formed into a properly functioning team they will be many times more effective; only then will the individual team members be achieving their full potential. The approach of the Christian leader is crucial to enabling their team to reach its full potential by developing a Christ-centered servant leadership, after all it will be distinctively Christian.

So, Christian leader,where is your team on the scale ranging from: pulling against each other, through to parity with a group of individuals, to being a team whose performance that exceeds expectations? Answering this question is just as important for Christian leaders as anyone else. Just because team members have a common faith does not mean that they will work well together without wise guidance and a clear role model from someone who is grounded in Christ and lives out his example.  To learn more about this Christian, servant leadership attitude take a look at “The King who Led with a Towel” series.

How well does your team do?

Based on the work of Pat MacMillan (The Performance Factor**) here is a simple diagnostic tool to help you decide.

For your team to be a great team the members must be “aligned”. This is not about the team being aligned to the leader necessarily, but the team, including the leader, having  a clear and shared purpose and a 100% commitment to realising that shared purpose in a common and coherent way. Plainly the Christian leader has a great responsibility to facilitate this achievement.  The following questions will help you consider exactly how aligned your team is:

Clarity is required in the minds of the team as to exactly what is the role of each member. The Christian leader needs to help the team develop this clarity, fudges don’t work.

A High Performing Team requires clear and competent leadership to facilitate and orchestrate the achievement of its goals. However, for specific activities task leadership will be provided by individual team members who have the necessary competence and capability to guide on that issue. Christian leaders can often fall into the “I’m in charge” trap for a host of reasons and many pastors and ministers have been trained in, and are expected to adopt a “one-man” style. However, effective leadership at any specific time is not based on a static position but by dynamic response to the encountered need and individual role.  The effective Christian leader facilitates this flexibility.

Team processes are not so much about individual jobs but are more about how the team interacts and functions as it makes decisions, solves problems and resolves conflicts. It’s about how the team members work together, encouraging and facilitating this is a key role for any Christian leader who wishes to model his style on Jesus.

Solid relationships are essential in a team but they are not about friendships but solid relationships; they are about being able to work together well. They are also about developing a trust in and appreciation of fellow team members so that collectively the team can deal with setbacks, misunderstandings, conflicts as well as those plain and simple bad days. This ought to be easy for Christians…… apart from the fact that we are all endowed with a fallen nature. The Christian leader needs prayerful wisdom in this area.

Excellent communications is a prerequisite for all the other characteristics. To function as a High Performing Team, members must understand not only how to share information in a way that others can receive but also to assume a responsibility for ensuring that they understand the communications that they receive. This short series on Effective Communications Skills can get the whole team moving in the right direction. If Email is a problem then this 0n-line training module Taming the Email Dragon: How To Be Responsible Emailer may be of help.

The process of building a High Performing Team requires that the team, as a whole, take stock of itself against these characteristics. It must then, together, undertake an appropriate plan of action to achieve its full potential. This is necessarily a process of individual steps which inevitably takes time to mature, although it is possible to make rapid strides. For instance a days training on the Responsible Communication style that a servant leader would use can begin to have an impact the very next day. As the team works, evaluates, learns and applies its learning, it will improve in performance as it becomes a High Performing Team. It will work more effectively, more collaboratively and refocus previously lost energy on achieving its purpose.  More than that the coherence of the team will magnify its achievement  as it begins to out perform its previous track record. This is a journey upon which a servant leader will take his team.

Find a quiet place for half an hour and ask yourself these questions about your team and see how they score.  In the light of the answers you get begin to work out an action plan to address your team’s weaknesses. Then sit down with your team and do the whole assessment together as the first step to involving the team in their journey toward becoming a High Performing Team.

What are the differences between a team of volunteers, a team of people who are vocationally motivated, a team of employees and a team of professionals? Is there a difference in their needs from a leadership perspective?

“Growing the Servant Heart” is a free white paper that examines the nature and role of  Christ-centred servant leadership in Kingdom enterprises teams.

An enterprise is an organisation specifically structured to deliver some specific good or service. Kingdom enterprises are those that have Christian objectives and which are led and staffed by Christians. Often they may be para-church organisations but a church may also be called to a specific ministry, which in itself is effectively an enterprise. A Kingdom enterprise requires a distinctively Christ-centred leadership style, following the example of the Servant King.

Download a free copy of Growing a Servant Heart here.

* Thanks to the power of the internet I have since discovered  the actual quotation is “Lord Ronald … flung himself upon his horse and rode madly off in all directions. ” from Nonsense Novels, “Gertrude the Governess” by Stephen Leacock. It subsequently gave rise to the name of a Canadian Radio show “Madly Off in All Directions”.